The Silas Pullen Fund was set up in 2014 under the umbrella of The Brain Tumour Charity in memory of a mighty boy.

Silas Pullen was only eleven years old when he died from a malignant brain tumour but he inspired an army of people with his courage and bravery and, after his death, his parents set up The Silas Pullen Fund to raise much needed money into paediatric brain tumour research so that other families might have more hope in the future.

Brain tumours are currently the BIGGEST cancer killer of children and young people and yet get less than 2% of National Cancer spend. We are going to change this with your help!

To date we have raised just under £800,000. A mighty thank you to all our supporters.

WHAT WOULD YOU DO IF A STRANGER TOLD YOU YOUR SON WAS GOING TO DIE? Silas is ten years old when the headaches start. A few days later, his parents are told that he has only months left to live. In A Mighty Boy, Silas’s mother traces her family’s journey from that first moment in… END_OF_DOCUMENT_TOKEN_TO_BE_REPLACED

The inaugural Mighty Boy Festival took place on Saturday 26th May 2018 at a picturesque private property neat the North Kent coast. It was an invitation only family music festival, with camping, food, an auction and other entertainment. The festival was run by a small number of hard working volunteers to raise money for The… END_OF_DOCUMENT_TOKEN_TO_BE_REPLACED 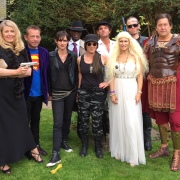 A fabulous evening of star-struck entertainment in 2016 which raised more than £60,000 for the charity.

An amazing evening of family camping fun organised by Silas’s godmother and friends which split an incredible £120,000 between two charities.